Yesterday was an odd day. For those of you who did not grow up on this planet, it was April Fools' Day, where the tradition is hoaxes and practical jokes. This year I decided to combine April Fools' Day with social commentary on the awful trend of using dead animals in interior design. Most of you got it, a few did not.

"Thanks for a great April Fool's joke used to bring attention to an important topic. This isn't, IMO, a "design" or "taste" issue - it's a humanity issue. Animals killed purely for sport, sewn together at their hind quarters and bedazzled with fabric is just horrifying. There is no redeeming factor here - these aren't animals killed for food humanely by people who used animals as food; these were animals killed by people who thought it was funny to shoot and kill and then stuff them and ship them home and laugh about them while they hung on their walls. Sorry to get so worked up, but thanks CC - I adore you for sticking up for pink, Palm Beach Chic, and animal welfare."

One follower had a meltdown -

"This is the most surprising and horrific post I've ever seen related to fashion design. You are help creating a demand for animals that will decimate populations already endangered and also employ suffering and an untimely death for "decorations." What's worse is that you dress the bodies up in costume as some sort of humorous attempt at clever decor -- when you know full well that these majestic animals were in fact, killed for this purpose. It's not only creepy, but immoral. These animals are a part of our natural world; They are important part of the web of life and stand as symbols of majesty and beauty -- in their own living world. Wild animals such as you portray are currently suffering and endangered by the mass slaughter by poachers for their coats, plumage and ivory, For shame that you would project such a oblivious attitude towards these animals all for the sake of superficial show. I hope that you will revise your thinking -- borrow from nature, yes -- but do not kill the precious few we have left! Manmade textiles and materials are a much better choice than Dead Animals. Your cynicism is so hard to take. There is nothing Chic about this. Please write an apology to your readers and make a donation to the World Wildlife Fund to actively support the preservation of these animals.

I hope I don't have to release myself from your blog because I've enjoyed it -- until now."

After emailing her and explaining that I was trying to shine a light on this horrible trend, she got even more livid that she had been duped -

"You know, it's really a stupid joke Beth because it's not funny and because clearly so many of your readers also believed it to be true. I wouldn't do a piece on jewelry from Holocaust victims' fillings for April Fools -- this is in the same vein of horrendously bad taste and poor judgment on your part as Dead Animals. That you could take up my time for a post and "fool" a busy educated journalist and mother shows an incredible lack of judgment on your part, it's beyond the pale. I subscribe only for design, not tasteless jokes at my expense.

"I am sorry the other person did not get it and chose to make a horrifying Holocaust reference; she needs to push a faux bamboo gilded bar cart over to her sofa, pour herself a frosty cocktail, lie down on a Scalamandre pillow, don a Lilly P eye mask, open an enameled pill box, remove a Xanax, swallow it, and get over it. "

Well, back to interior design and Chinoiserie. This week I am focusing on a DIY version of the juju shown below from the apartment of Lonny editor Michelle Adams since I can't find it anywhere. There are lots of DIY tutorials. 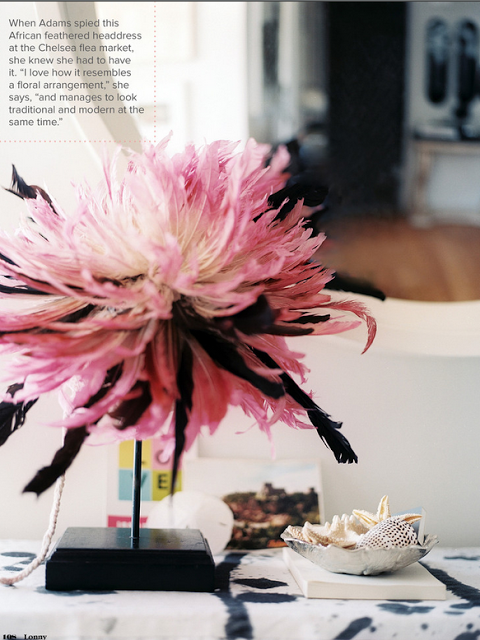 I will also be working on styling my bookshelves for my home office makeover. I have a Pinterest board on bookshelf styling here.

I am awaiting one more piece of art for the gallery wall for my office and I will begin the framing. I have a Pinterest board on gallery walls including some with Chinoiserie and some with pink walls for inspiration here since many gallery walls are more modern or monochromatic than mine will be. 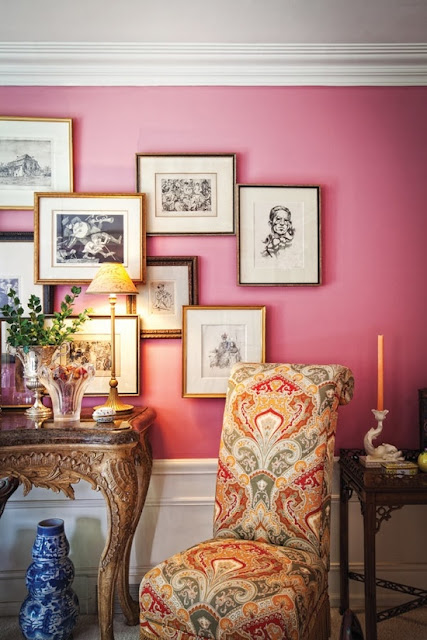