Another Before and After 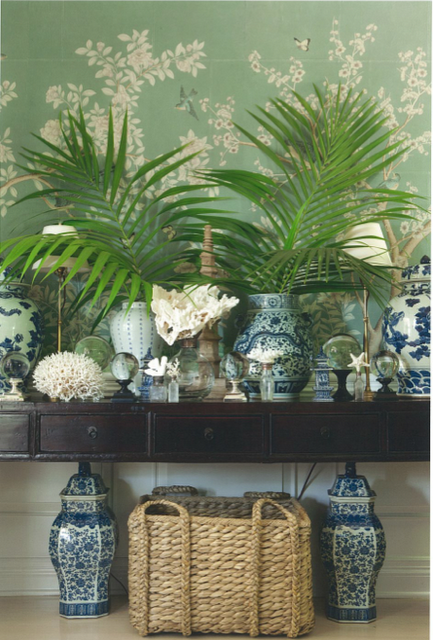 I am always fascinated when I find a picture of a room in a magazine and then run across the "real" room before it has been styled, staged, and photoshopped by the magazine. I will have to put together a post on all of the examples I have blogged about before.

Above is a beautiful Chinoiserie vignette from the home of interior designer Mark Sikes that appeared in House Beautiful and has been pinned and posted countless times. Look at all the changes they made - the orchids and clay pots are gone. They have added dramatic blue and white Chinese porcelain vases filled with palm fronds, seashells and coral, the mini pagodas I am always posting about, and have rearranged things in a much more symmetrical and pleasing way.

The close-up shot loses the rather unattractive rug and awkward sconce on the wall and makes the console table appear less heavy. The only thing I would have tweaked in the after shot above is to lose the electrical cords hanging below the console since the lamps are not on in the photo anyway. I have a close friend with exquisite taste who is a fanatic about exposed cords and will get a kick out of this. I was once in a show house where the interior designer had cut off all the lamp cords from all of the lamps in the entire house! 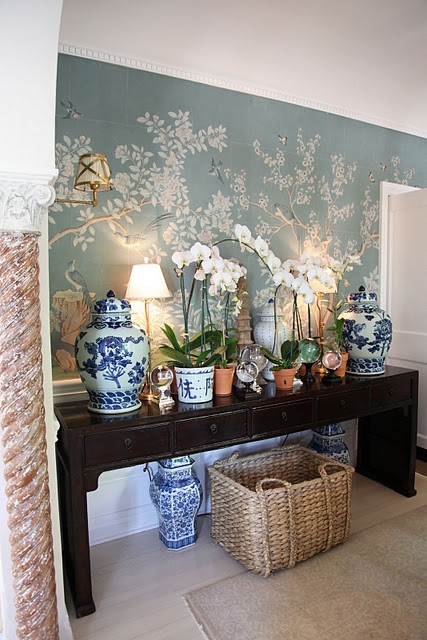 Labels: before and after, blue and white Chinese porcelain, House Beautiful, Mark Sikes