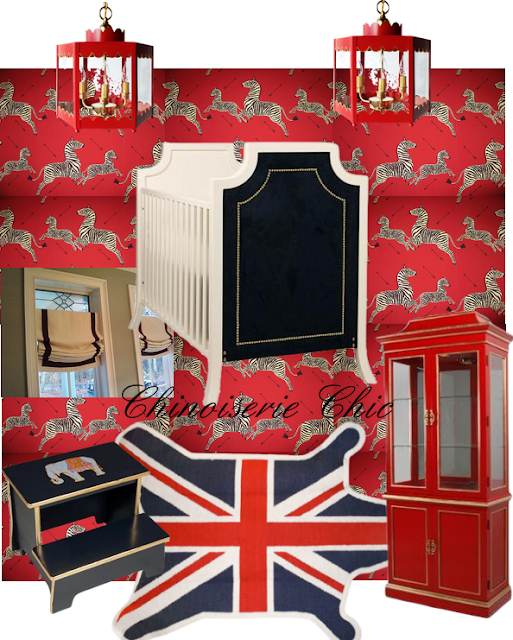 For today's post, I have created a nursery for a royal prince of England. With a nod to British Colonial style, the walls are wallpapered in Scalamandre Zebras, and there is an elephant step stool in navy with gold edging and a dramatic Union Jack zebra rug by Jonathan Adler. The window treatments are linen with inset bands of navy linen. The crib is paneled in navy linen with brass nailhead trim. The red lacquered pagoda display cabinet is edged in gold. It is Chinoiserie, but also reminds me of a London telephone booth, now extinct. All furniture is from Art for Kids. The red scalloped lanterns are from Coleen and Company.

Below is also my inspiration board for the nursery for a royal princess from yesterday's post. Both nurseries are quite sophisticated, and could become rooms for a growing prince and princess by switching out the crib for a campaign bed. "Campaign" furniture was made to travel for military campaigns.

"Any furniture specifically made to breakdown or fold for ease of travel can be described as campaign furniture. It was designed to be packed up and carried on the march. It has been used by traveling armies since at least the time of Julius Caesar but it is commonly associated with British Army Officers, many of whom had purchased their commissions. With the rise and expansion of the British Empire in the 18th and 19th centuries the demand by the military, administrators and colonists increased. British officers of high social position in the Georgian and Victorian periods (1714–1901) often carried high quality portable furniture." --- Wikipedia

Posted by Beth Connolly at 8:45 AM